So I have a confession guys:

I have a soft spot for dating sims.

I know, it's silly, and I'm probably waaaaay too old for them, but they're easy and kinda cute. I started with apps for my phone, and those are frustrating as all hell since you can only do so much at one time and I want to know the ending NOW.

So I kind of got back in to them with Jurassic Heart (I'll post some pictures and my thoughts on that tomorrow) which is silly and extremely quick.

But then I needed more. I also didn't want to pay because I'm waiting to spend my hard-earned cash on Hatoful Boyfriend since it's on Steam. So I googled around and I found this one: Kaleidoscope Dating Sim (1). I had no idea wtf I was doing.

Basically you have 30 "sleep cycles" (days) to meet someone and to find your dream soul mate so you can leave.

All you do, as I found, is click on things. Repeatedly. Over and over. It was also really annoying that when you responded to your chosen victim (mine was Angel, pictured below) they say things like "nice" or "hmmm" after to tell you how you did, but DON'T ACTUALLY FUCKING RESPOND TO YOUR REPLY. Jeebus. It was really annoying. Also if you say the wrong thing you have to use precious hp to choose the correct answer instead of simply moving on, as what would happen irl.


I think it was a cute idea, but it got old after awhile. Here's a guide and here's a link to the creator's DA account.

Overall I'd give it a 6/10. The graphics were nice and it was a good idea, but not so great in practice. 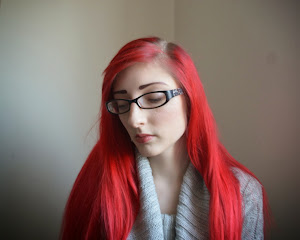 I guess this'll do.

I'm a Uni student with a passion for reading, French, knitting, snail mail, Star Trek, Dr Who, video games, Latin, the classics, public transit, thrifting, and fashion (among other things).

Check me out on Bookcrossing!